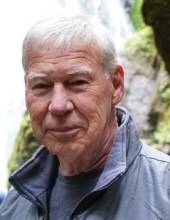 He died while sky diving naked over the Rockies without a parachute. At least, that's how he would have told the story.

In his past life, he said that he was a scout on the Oregon Trail. Although that sounds pretty epic, this recent life of his was just as entertaining.

He was born on June 16th, 1944 in Leola, PA. He graduated from Conestoga Valley High School in 1963. He spent a summer as a lifeguard and party animal in Wildwood, NJ before getting to live out his passion of traveling all over the country for work. His kids, grandkids, and many others knew him as Santa and have no idea what he actually did for a living.

He is survived by his significant other Shiumei S. Hui of Lancaster, PA. His daughters Tiffiny Trupe of Wildomar, CA, engaged to James Beltrame, and Traci Cornelison of Manheim, PA, married to Alex Cornelison. His grandchildren Dylan Spain, Justin Spain, Lexi Cornelison, and Wyatt Cornelison. His sisters, Alice Weiler, Barbara Kensinger, and Linda Peachey. He is preceded in death by his parents, Lloyd and Naomi Trupe, and his brother Terry Trupe.

He loved his family, traveling, dark chocolate, cigarettes, people watching, Ford Mustangs, "Ancient Aliens," Miller Lite, and a good conspiracy theory - in no particular order. He hated the salad bar at Ruby Tuesday for being so close to the front door, technology, and funerals.

He was the life of the party, who did many inappropriate things to embarrass his kids. He was the king of dad jokes and harassing people just to make them smile. He was great at telling stories that were mostly true. He enjoyed long walks in the park, picnics, and trespassing to get the best view.

In his retired years, he enjoyed taming wild animals in his backyard, riding around in his golf cart just to wave at everyone in the camp ground, and checking himself out of hospitals AMA (against medical advice).

Before he passed, he left his daughters with one last memory, like only he could - by almost getting kicked out of hospice with his demand for cigarettes and alcohol. He was always the one you could call if you ever got into trouble, or if you wanted to.

He would want everyone to remember him as the lively jokester that he was, so there will not be a viewing or funeral.

Everyone who remembers him is asked to celebrate Bill's life in their own way; raising a glass of your favorite beverage in his memory would be quite appropriate.
To order memorial trees or send flowers to the family in memory of William K. "Bill" Trupe, please visit our flower store.