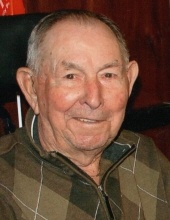 William E. “Bill” Althouse, 96, of Elizabethtown, died on Monday, September 21, 2020 at Masonic Village at Elizabethtown. Born in Ronks, he was the son of the late David and Cora Harnish Althouse. Bill was the loving husband of Gloria J. Fry Althouse and they celebrated their 72nd wedding anniversary this September. He was a 1941 Strasburg High School graduate and later went on to proudly serve in the United States Marine Corps during World War II. Bill was a faithful member of Zion Evangelical Lutheran Church, Manheim, where he served as an usher, on church council, and on the property and building committee. He was a carpenter and in 1955 moved his family from the home he built in Strasburg into the new home he built in Manheim where he and Gloria remained until moving into Masonic Village in 2010. He worked for various construction companies over the years before retiring from Penway Construction, Manheim. Bill was a lifetime member of the Manheim Historical Society where he helped move the Keath House and restore the Trolley. An avid hunter and trap shooter, he was also a lifetime member of the Manheim Sportsmen’s Association where he held all office positions over the years. He was a member of the Manheim Masonic Lodge #587, and was an avid card player.

Relatives and friends are respectfully invited to attend Bill’s Funeral service at the Buch Funeral Home, 21 Market Square, Manheim on Wednesday, September 30 at 11:00 AM. There will be a viewing and time of visitation from 10:00 AM until the time of service. Please note that COVID 19 protocols will be in place. Social distancing and masks are required. Interment will be in Indiantown Gap National Cemetery, Annville at 1:30 PM. Those desiring may send contributions in Bill’s name to the Manheim Historical Society, 210 South Charlotte Street, P.O. Box 396, Manheim PA 17545.
To order memorial trees or send flowers to the family in memory of William E. "Bill" Althouse, please visit our flower store.