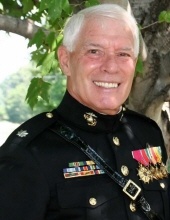 William “Bill” Wilson Green (Lieutenant Colonel USMC, ret.) of East Petersburg, affectionately known as “Opa” to many beyond his 6 grandchildren and 6 great-grandchildren, passed away October 17, 2020. He is dearly missed by his loving wife of 40 years, Marlena Irvin Green, his daughters and their husbands Sue and Mike Kennedy, Kelly and Chris Wood, and Jennifer Green and Dean Matlack.

Born and raised in the small tobacco town of Roxboro, North Carolina, William was shaped by the love and leadership provided to him by his father and mother, the late James W. and Lucile Anderson Green, Roxboro Baptist Church, the Boy Scouts where he rose to be an Eagle Scout (Order of the Arrow), and his years as a dedicated athlete that eventually took him to play at Appalachian State University as a running back (1964-1968).

It was while playing football for ASU that the United States Marine Corps recruited him to lead and serve his country in the Vietnam war as a 2nd Lieutenant and that then led to a proud and accomplished 27-year career as an infantry officer. The Marine Corps dictated much of Bill’s path in life, and defined many of his most proud and accomplished moments – taking him from Quantico, Virginia officer training to North Vietnam, to Okinawa and to Pennsylvania, to Iceland, North and South Carolina, and Hawaii, and back again to Quantico. Among these assignments, he was particularly proud when he became the commander for the 1st Battalion, 6th Marines – based in Camp Lejeune, North Carolina consisting of approximately 1,100 marines and sailors and serving on the flagship of the U.S Naval Pacific fleet out of Hawaii.

After retiring from the Corps, Bill worked as a State employee for the Commonwealth of Pennsylvania, retiring in 2010.

He was an active and faithful member of St. Paul’s United Church of Christ, Manheim, serving on the Church Consistory, as Deacon and Treasurer. He was also a member of the Manheim’s Veterans of Foreign Wars and American Legion. Bill was a longtime member of the Lancaster Liederkranz where he enjoyed polka dancing and German food with family and friends.

During much of the year, Bill was golfing – rain or shine- and skiing in the winter. But what he loved most was spending time with friends and family. While Bill undoubtedly loved the Marine Corps, nothing compared to his love for his beloved wife, best friend, and caregiver – Marlena.
The family extends its deep gratitude for the care and support provided by Hospice & Community Care.

Everyone is invited to gather with the family in the parking lot at St. Paul’s United Church of Christ, 50 North Main Street, Manheim, on Monday, October 26, 2020 at 12:00 PM and departing promptly at 12:30 PM for Indiantown Gap National Cemetery, Indiantown Gap Road, Annville. The interment with Military Honors at the cemetery will begin promptly at 2:00 PM. Kindly wear a mask and observe social distancing as per CDC guidelines. In lieu of flowers, contributions may be sent in Bill’s memory to St. Paul’s United Church of Christ, P. O. Box 129, Manheim, PA 17545, or to Keystone Warriors, 16 East Noble Avenue, Shoemakersville, PA 19555.
To order memorial trees or send flowers to the family in memory of William "Bill" Wilson Green, please visit our flower store.