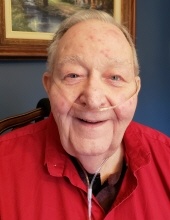 Wilford E. “Bob” Temple, 94, of Manheim, passed away peacefully on Saturday, September 4, 2021 at home. Born in Altoona, he was the son of the late Hobart McKinly and Margaret Friday Temple. He was the loving husband of the late Ruth Earl Temple who passed away in 2004 and the late Iona Colby Temple who passed away in 1975. Bob worked as a pipefitter for U.S. Steel Corporation and for the Altoona Railroad. He was a member of Shriners International, Jaffa Shriners, Altoona, the Ancient Accepted Scottish Rite, Valley of Altoona, and Masonic Lodge, Logan Lodge #490. Bob proudly served in the United States Navy during World War II.
Surviving is three daughters; Carolyn wife of Martin Wright, Manheim, Jane Temple, Tyrone, Susan wife of Tom Morrisroe, Valparaiso, IN, a step son, Dave husband of Mary Stercula, Fairless Hills, a daughter-in-law, Joy Shearer, Hellertown, twelve grandchildren, thirteen great grandchildren, two great great grandchildren and three sisters; Dorothy Lansberry, Holidaysburg, Shirley Temple, Altoona, and May wife of Robert McConnell, Altoona. He was preceded in death by a son, Kenneth Shearer, three brothers, Donald, Hobart Jr., and Larry Temple, and two sisters, Margaret Phillips and Anna Sharrar.
Relatives and friends are respectfully invited to attend Bob’s funeral service on Saturday, September 11, 2021 at Buch Funeral Home, 21 Market Square, Manheim at 11:00 AM. There will be a viewing from 10:00 AM until the time of service. Interment will be private.
To order memorial trees or send flowers to the family in memory of Wilford E. Temple, please visit our flower store.