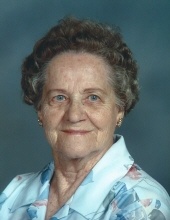 Virginia E. Schafer, of Mount Joy, passed into eternal life on Saturday morning, January 22, 2022 at the age of 103. She was the wife of the late Harold F. Schafer and mother of two children, Dr. Ronald Schafer of Hummelstown, and Joan Boyer of Manheim. She was born on August 8, 1918 in Lancaster, Pa, and spent most of her childhood years there. She was a stay-at-home mother, enjoying cooking, gardening, and raising two unpredictable children.

Later in life she became a strong supporter of the Schafer and Boyer families, fulfilling her role as matriarch of the clan. In the meantime, she had established an astonishing record of 2 children, 8 grandchildren, 14 great-grandchildren, and 13 great-great-grandchildren. Virginia was always interested in music, from singing with the radio while doing housework in the 40’s and 50’s, to attending musicals and concerts throughout her life. She and Harold were very active as members of the Trinity Lutheran Church in Mount Joy, participating as ushers and assisting with numerous church projects.

Funeral arrangements will be organized through Buch Funeral Home, Mount Joy. A Private Memorial service is being held for immediate family. In lieu of flowers, donations may be made to the Trinity Lutheran Church, 47 West Main Street, Mount Joy, PA 17552 or the Central Pennsylvania Symphony, P.O. Box 55, Hummelstown, PA 17036, centralpasymphony.org
To order memorial trees or send flowers to the family in memory of Virginia E. Schafer, please visit our flower store.