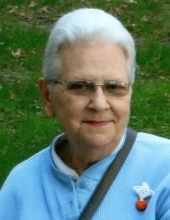 Violet E. Bauman, 85, of Lancaster passed away peacefully on Tuesday, July 30, 2019 at Lancaster General Hospital. Born in Penn Township, she was the daughter of the late Chester K. and Mamie Ober Frey. She was the wife of the late Edward D. Bauman who died in 1999. Retired in 1997, Violet was a manager for Sears in the Park City Mall, Lancaster. She also worked for Rebman’s, Farmers First Bank and Logan’s all of Lancaster. Violet was a 1952 graduate of the former Warwick Township High School and enjoyed volunteering as a Den Mother for Cub Scout Pack 145, Lancaster. Her interests included traveling and attending dinner shows.

Surviving is a son, David D. Bauman of Lancaster, two siblings: Robert husband of Arlene Frey of Lititz and Charlotte wife of Wayne Splain of Columbia. She was preceded in death by a sister, Doris King and brother, Chester D. Frey.

Funeral services for Violet will be held at the Buch Funeral Home, 216 South Broad Street, Lititz on Monday, August 5, 2019 at 10:30 AM. There will be a viewing from 10:00 AM until the time of service. Interment in Hernley Mennonite Cemetery, Rapho Township.
To order memorial trees or send flowers to the family in memory of Violet E. Bauman, please visit our flower store.