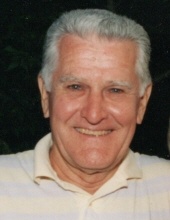 Theodore Adamko devoted husband, loving father and grandfather, dedicated firefighter and community supporter, age 92, passed peacefully in his sleep the morning of February 6, 2021 after a valiant struggle with Alzheimer’s disease at the Mennonite Home in Lancaster, PA. He never allowed anything to destroy his sweet and gentle nature. Until recently, Ted was a lifelong resident of Freehold, NJ. Ted was born on August 12, 1928 to Nicholas and Justina (Tymeczko) Adamko, the youngest son of four children where they lived on Ford Ave. He graduated from Freehold High School, class of 1946, where he met the love of his life, Mary Louise Schaeffer. They married September 2, 1950 and celebrated 65 years together until her passing in May, 2016.

Ted served in the Marine Corps during the Korean War from July 1952 until April 1954. In civilian life, Ted’s working career started at Delmore Manufacturing Company then transitioned to the Beech Nut Packing Company as a salesman. Ted started selling insurance when he worked as an agent for the Prudential Insurance Company for 12 years, then the Smith Insurance Company and finally Collins and Smith Insurance until his retirement. He also enjoyed selling cars part time at Davidson’s Mercedes Benz dealership on Route 9, Freehold.

As a dedicated volunteer fire fighter, Ted joined Richardson Engine Company #2 of the Freehold Fire Department where he served in various positions and eventually became fire chief. His dedication to the fire department spanned 50 years. Ted was actively involved in his community and his church, St. Rose of Lima, Freehold. He supported food drives, coached ball teams and chauffeured his children to their activities. Later he doted on his grandchildren; Nicholas, Jessica, Jennifer and Amanda. What most people remember about Ted would be his sparkling blue eyes and his easy-going manner. He was always a perfect gentleman, loving, supportive and kind.

Ted enjoyed many hobbies including fishing, decoy collecting along with annual trips to St. Michaels, Maryland for their annual Water Fowl Festival. He was an avid reader and an entertaining conversationalist. During their retirement Mary and Ted enjoyed traveling the Eastern Coast with family taking garden tours and visiting museums, the Shelburne Museum being a favorite. They also visited friends who had moved outside of the Freehold area.

The family will be eternally grateful for all the loving kindness shown to Ted by the staff of Swarr and Trout Run and Masonic Homes Hospice.

A Mass celebrating his life will be at St. Rose of Lima, Freehold, NJ on Friday, April 30, 2021 at 10:30 AM followed by internment at Major Doyle Cemetery. Contributions may be made in his memory to Freehold Fire Dept. Engine Company #2, 51 West Main St., Freehold, NJ 07728.
To order memorial trees or send flowers to the family in memory of Theodore Adamko, please visit our flower store.