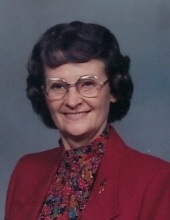 Theda N. Sloat, 86, formerly of Elizabethtown and Woodcrest Villa, Lancaster, died peacefully, Monday, May 4, 2020 at the Mennonite Home, Lancaster. She was the wife of the late William A. Sloat, Sr., who died in 2017. Born in McConnellsburg, she was the daughter of the late Pleasant and Myrtle (Keefer) DeShong. Theda had worked as an assembler at the former Schick Electric, Lancaster, but most of her life she was kept busy as a homemaker. She was a member and former Sunday school teacher of St. Paul’s United Methodist Church, Elizabethtown. Her hobbies included gardening, ceramics and traveling with her husband to New England, Branson, MO, Florida, Hawaii, Alaska, and especially to Williamsburg, VA.

Due to current public health guidelines, services will be private and at the convenience of the family. Interment will be in Mt. Tunnel Cemetery, Elizabethtown. Contributions in Theda’s memory may be sent to Mennonite Home, Benevolent Care, 1520 Harrisburg Pike, Lancaster PA 17601.
To order memorial trees or send flowers to the family in memory of Theda N. Sloat, please visit our flower store.