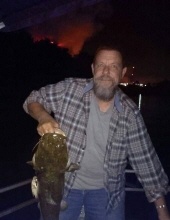 Steve L. Szobocsan Jr., 62, of Manheim, and formerly of Elizabethtown; died peacefully on Tuesday, August 17, 2021 at the Lancaster General Hospital. Born in Harrisburg, he was the son of the late Steve L. Sr. and Thelma “Penny” Van Aken Szobocsan. Steve was the loving husband of Patricia M. “Patti” Alleman Szobocsan and they would have observed their 41st wedding anniversary in October of this year. Steve most recently worked for SKH Distribution Center in Manheim. His memberships included: the Abraham C. Treichler Masonic Lodge # 682, Elizabethtown, and the Elizabethtown Moose Lodge 596, National Rifle Association, and the Middletown Anglers and Hunters. Steve was a passionate outdoorsman; who loved being in the woods whenever he had the opportunity to hunt, or ride his ATV or fish at a nearby stream. Whether in the woods, or in his wood shop he loved and cherished the time he would spend with his children and grandchildren. He leaves behind many handcrafted heirlooms that they will treasure.

Relatives and friends are respectfully invited to attend Steve’s life celebration service at the Buch Funeral Home, 21 Market Square, Manheim, on Saturday, August 21, 2021 at 1:00 PM. There will be a viewing at the funeral home on Saturday afternoon from 12:00 noon until the time of the service. Interment will be private in Resurrection Cemetery, Harrisburg. Those desiring may send contributions in Steve’s memory to Pitties Love Peace (primary focus is on the rescue and rehabilitation of PitBull and bully mix dogs and puppies) P. O. Box 534, Elizabethtown, PA 17022.
To order memorial trees or send flowers to the family in memory of Steve L. Szobocsan Jr., please visit our flower store.