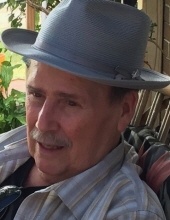 Ross Thomas Jones, 67, of Landisville, came to rest when his life energy changed forms, releasing into the cosmos, on Monday January 20, 2020 at Lancaster General Hospital.

Ross's spirit took human form in Warranton Virginia, he was the second child of the late Ross A. and BettyAnn Warrington Jones. Ross spent his formative years in Lancaster City. He got his GED and became a paratrooper in the 82nd airborne in 1969, and served our country until 1972, where upon he received an honorable discharge from the United States Army. Ross spent forty years with the United States Post Office.

Ross was a gifted visual artist, creative writer and avid reader who loved music and the arts.

Surviving are a sister, CarolAnn Jones and her spouse Dale E. Martin and several nieces and nephews. He was preceded in death by a sister, Barbara E. Rooney.

Funeral services are private and at the convenience of the family. In lieu of flowers, please give great big hugs to those you love, send positive energy out into the universe, and keep on rockin' in the free world.
To order memorial trees or send flowers to the family in memory of Ross Thomas Jones, please visit our flower store.