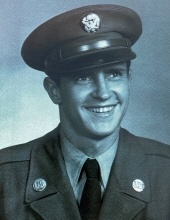 Ronald Edward Hufford, 86, of Lititz, went home to be with his Lord on Monday, May 18, 2020 at UPMC Lititz. Born in Ephrata, he was the son of the late Edward and Hilda Kilhefner Hufford. Ron was the loving husband of Doris M. Frederick Stauffer Hufford and they observed their 25th wedding anniversary in March of this year; his late wife was the late Marilyn Hufford. Ron was a 30-year employee of Trojan Yacht, Lancaster. A veteran, Ron served in the U.S. Army 82nd Airborne Division during the Korean war. He also volunteered with the Ephrata and Wheatland Fire Companies. Ron was a member of Trinity Evangelical Congregational Church, Lititz; where he attended regularly with his wife, Doris. Ron loved camping, traveling, and taking trips across the United States and overseas. He especially loved visiting his two sons out west in Arizona. He was an accomplished wood craftsman. He enjoyed following NASCAR racing and rooting for his Phillies and Packers. Ron was a loving husband, a caring father, and the very best of grandfathers.

Services for Ron will be private and at the convenience of the family. Interment will be in Greenwood Cemetery, Lancaster.
To order memorial trees or send flowers to the family in memory of Ronald E. Hufford, please visit our flower store.