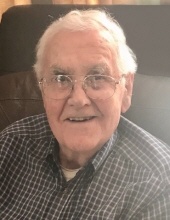 Robert Landis Groff, 95, of Lititz, died unexpectedly Thursday April 30, 2020 at Keystone Villa, Ephrata. He was the loving husband of Dolores (Booth) Groff and they celebrated 72 years of marriage on March 27, 2020. Born in Lititz, he was the son of the late Jason R. and Emma (Landis) Groff. Bob worked as a carpenter for E.E. Murray & Son and Consolidated Construction. He proudly served in the U.S. Army 502nd Parachute Regiment of the 101st Airborne Division during WW II.

He was a member of Long Memorial United Methodist Church, Neffsville. Bob was an excellent gardener who enjoyed growing and harvesting fruits and vegetables. He was a great craftsman, enjoyed building birdhouses, benches etc. He was also quite the handyman, enjoyed attending auctions and had quite the love for horses and ponies.

Due to current public health guidelines, services will be private and at the convenience of the family. Interment will be in Manheim Fairview Cemetery on Thursday May 7th, contact family for details. Contributions in Bob’s memory may be sent to the charity or organization of one’s choice.
To order memorial trees or send flowers to the family in memory of Robert Landis Groff, please visit our flower store.