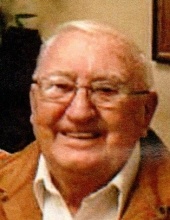 Robert E. “Bob” Witman, 91, of Manheim, passed away on Sunday, June 16, 2019 at Country Meadows, Lancaster. Born in Manheim, he was the son of the late Amos and Sadie Reppert Witman. Bob was the loving husband of the late Roita V. “Reedy” Weidman Witman who died in November of 2007. Bob started his work career at the former Hamilton Watch Company, Lancaster. He then worked many years as an audio operator for WGAL TV and part-time for Dutchland Tours conducting tours of the Amish Country. Following retirement, he worked part-time as a courier for the Fulton Bank and for the Manheim Auto Auction. Bob was a faithful and active member of the Zion Evangelical Lutheran Church, Manheim where he served as President of the Church Council and as a Sunday school teacher for 69 years. A 1947 graduate of the former Manheim High School, Bob enjoyed playing the banjo, hunting in his early years, and was an avid Philadelphia sports fan.

Surviving are two daughters: Christine A. wife of Robert Gifford of Lancaster, Cynthia L. wife of Abraham Sanchez of Washington Boro, two sons: Randall S. husband of Denise Witman of Lake Suzy, FL and Kevin R. husband of Janet Witman of Cochranville, seven grandchildren, two great-granddaughters, a brother Donald husband of Barbara Witman of Palmyra, and three sisters: Nancy Huber and Peggy Troop both of Lancaster and Doris Gabriel of Manheim. He was preceded in death by a brother, Richard “Dick” Witman.

Relatives and friends are respectfully invited to attend his graveside service at East Fairview Church of the Brethren Cemetery, 1187 Fairview Road, Manheim on Saturday, June 22, 2019 at 2:00 PM. Friends may visit with the family following the graveside service. Please omit flowers.
To order memorial trees or send flowers to the family in memory of Robert E. "Bob" Witman, please visit our flower store.