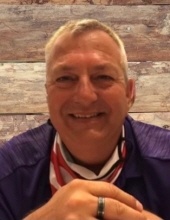 Ray Lane Keller, 50, passed away unexpectedly on November 10, 2020. Born September 27, 1970 to the late Jacqueline Jean and Robert Lloyd Keller Sr., he was a truly devoted husband and a beloved friend for many. While his departure came suddenly, it is clear that he has made a lasting impression on all who knew him. He always made an effort to connect with other people and make them laugh, and it is this legacy that makes Ray impossible to forget.

The son of a pastor, Ray lived with faith and intellect in his heart. His unique perspective on life guided him and gave him plenty of opportunities to discuss high-level topics and learn new ideas. Firm in his beliefs, Ray stood by his ideals but never turned down an opportunity to explore new perspectives.

A notoriously hard worker professionally and otherwise, Ray led his life with relentless effort and passion, so much so that his evenings often featured a long, well-deserved nap. His snoring assures us that the rest he received during this time was refreshing.

Over the course of his life, Ray made many good friends, and his love of music, intellectual discussion, and general hilarity have resulted in countless memorable moments. More than anything, he wanted others to enjoy themselves, and he often encouraged friends to live life to the fullest even as he settled in for the night to snooze. His frequent haunts including the American Legion and the Vikings Club will be much quieter without him; after all, he was the "Music Man" and managed the tunes while he was there. We hope someone else will take the mantle and uphold that legacy.

His life will be celebrated at 1 PM on Sunday, November 29 at Dover Fish and Game, 6071 Fish and Game Road, Dover, PA 17315. In lieu of flowers, we encourage donations to be made in Ray's name to the American Heart Association.
To order memorial trees or send flowers to the family in memory of Ray L. Keller, please visit our flower store.