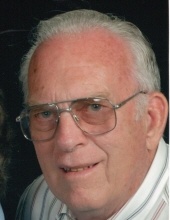 Ralph H. Martin, 87, of Manheim, passed away on Wednesday, April 22, 2020 at Lancaster General Hospital. Born in Lancaster, he was the son of the late Paul B. and Alma Lefever Martin. He was the loving husband of the late Gwendolyn Sterneman Martin who passed away in 2017. Ralph was the owner and operator of the former Martins Greenhouses, Lancaster for over 20 years and later retired from the former D&L Grower Supplies, Leola where he was a salesman for 19 years. He was a member of Lancaster Church of the Brethren. Ralph volunteered as a driver and was involved in the Train Club at Pleasant View Retirement Community. He enjoyed fishing and loved spending time with his family.

Due to public health guidelines, services for Ralph will be announced at a later date. Interment is private at Bareville Cemetery, Leola. In lieu of flowers, those desiring may send contributions in Ralph’s memory to Pleasant View Retirement Community Benevolent Care Endowment Fund, 544 North Penryn Road, Manheim, PA 17545.
To order memorial trees or send flowers to the family in memory of Ralph H. Martin, please visit our flower store.