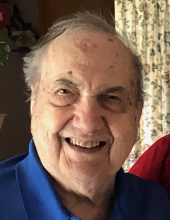 Ralph Garman Givler, 88, of Penryn, went home to be with the Lord on Monday morning, November 2, 2020 following a short illness.

Ralph was an avid sports fan, but no team ranked higher for him than his beloved New York Yankees. He was a softball umpire for 40 years, enjoyed spending his summer evenings watching Manheim Church League softball games and was at one time a player and coach for the Manheim senior (over-60) softball team. Ralph and his late brother Henry were avid fastpitch softball players during their younger days.

As much as Ralph loved his ball, it paled in comparison to his love for and dedication to his family. He and Lois had just celebrated their 63rd wedding anniversary in September. He was proud of his sons, Doug and Mike, for all they have accomplished on and off the ball field. And he would always greet his grandchildren Cameron, Kylie, Ally and Erin with loving hugs.

A member of the White Oak Church of Brethren, Manheim, Ralph was employed at Alcoa in Lancaster for 30-plus years as a machine operator (1955-87), making metal fasteners like rivets and bolts, before transitioning to Precision Form in Lititz for another 12 years (1987-99).

Ralph is survived by his loving wife, Lois, two sons (Doug, husband of Donna, of Landisville; and Mike, husband of Jenn, of East Petersburg), and four grandchildren. He is also survived by a sister, Joan Young of Lititz. He was preceded in death by two sisters: Jean Becker, Joyce Plasterer, and a brother, Henry Givler.

Services will be private and at the convenience of the family. Interment will be in White Oak Church of the Brethren Cemetery.
To order memorial trees or send flowers to the family in memory of Ralph Garman Givler, please visit our flower store.