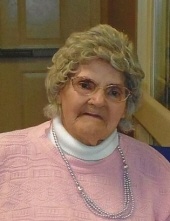 Pauline B. Hess, 96, of Elizabethtown, and formerly of East Petersburg, died on Thursday, February 4, 2021 at Elizabethtown Nursing & Rehabilitation Center. Born in Rohrerstown, she was the daughter of the late John and Alta Rohrer Bear. Pauline was the loving wife of the late Jonas G. Hess who died in March of 1999. She was a faithful member of Hempfield Church of the Brethren, East Petersburg. A Homemaker, Pauline enjoyed baking, scrapbooking, and doing puzzles.

Relatives and friends are respectfully invited to attend Pauline’s funeral service at the Buch Funeral Home, 21 Market Square, Manheim, on Wednesday, February 10, 2021 at 11:00 AM. There will be a viewing and visitation with the family from 10:00 AM until the time of service. Interment will be in the Hempfield Church of the Brethren Cemetery, East Petersburg. Those desiring can send contributions to Hempfield Church of the Brethren, 1186 Stevens Street, Manheim, PA 17545.
To order memorial trees or send flowers to the family in memory of Pauline B. Hess, please visit our flower store.