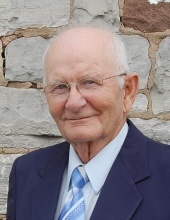 Paul K. Farrel
Paul K. Farrel, 88, of Manheim, died peacefully surrounded by his family and friends on Wednesday, July 31, 2019 at the Lancaster General Hospital. Born in Paradise, he was the son of the late Roy L. and Edna Kreider Farrel. Paul was the loving husband of the late Esther Mae Martin Farrel who died in April of 2011. For over 40 years Paul was involved in farming in Lancaster County, and also for a time owned a farm in Rapho Township; he then drove school and charter bus for the former Rufus K. Geib Bus Service in Manheim. Following semi-retirement Paul worked as a truck driver for R.M. Kurtz Enterprises, Inc. Ephrata. He was a member of Grace Community Fellowship Church, Manheim. His interests included: hunting, fishing, camping and rooting for his “Phillies”. Paul enjoyed visiting friends and family, and taking trips to Florida and going to the cabin at Cedar Run. He enjoyed playing softball in the Manheim recreational league as well as the senior men’s league; and served as an umpire when the bases got to far for him to run every week. He loved his family deeply, and was proud of his children, grandchildren, and great grandchildren. Paul will be missed by all that knew him.
Surviving is a son, Marvin husband of Joyce Rhoads Farrel of Manheim, four daughters: Kathy Ann wife of Michael Akers of Strasburg, VA, Pauline Sue Farrel at home, Mary Jane wife of Ralph Kurtz of Ephrata, Doris wife of L. Jeffrey Ebersole of Elizabethtown; thirteen grandchildren: Angela, Ryan, Marsha, Jason, Crystal, Lance, Shane, Nicole, Lane, Lloyd, Christopher, Ashley, Julie; sixteen great grandchildren: Tegan, Ty, Tylee, David, Morgan, Sara, Rachel, Dalton, Mitchell, Elijah, Israel, CodiAnn, Collin, Jayden, Tanner and Tein; three great great-granddaughters: Josie, Nova, and Riley; a sister, Arlene Piefer of New Holland, and half sister, Elsie Mae wife of Elmer Martin of Lancaster, and a brother-in-law, Mel Glick of Smoketown. He was preceded in death by his step mother, Verna Farrel, two brothers, Emory and Roy Farrel and two sisters, Dorothy Farrel and Erma Glick.

Relatives and friends are respectfully invited to attend his funeral service at the Hernley Mennonite Church, 746 Lebanon Road, Manheim, on Monday, August 5, 2019 at 11:00 AM. Interment will be in the adjoining church cemetery. There will be a viewing at the Buch Funeral Home, 21 Market Square, Manheim, on Sunday evening from 6:00 P.M. until 8:00 P.M. with additional viewing at the church on Monday morning from 10:00 AM until the time of the service.
To order memorial trees or send flowers to the family in memory of Paul K. Farrel, please visit our flower store.