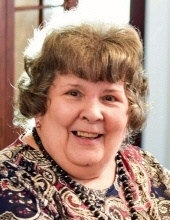 Patricia A. Adams, 77, of Lancaster, died Saturday, January 16, 2021, at Lancaster General Hospital, after a brief illness. She was the widow of the late Richard C. Adams who died in 2006. Born in Lancaster, she was the daughter of the late Henry and Gladys (Edwards) Brackbill. Patricia was a secretary for Adams Drywall Co. but enjoyed being a wife and mother. She was a member of Zion Evangelical Lutheran Church in Manheim. She was a member of the Order of Eastern Star and Ladies Auxiliary VFW. Pat would keep everybody on their toes saying what's on her mind at all times. She could make friends with complete strangers in no time with her charming and easygoing personality. Pat loved to play games and took them all seriously no matter what game it was. She often considered herself to be a “professional” bingo player. She also enjoyed shopping on QVC, but her greatest joy was spending time with her family.

Services and interment for Pat will be private.
To order memorial trees or send flowers to the family in memory of Patricia A. Adams, please visit our flower store.