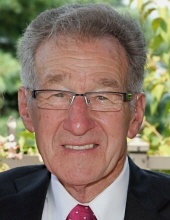 Noah W. Kreider, Jr., 83, of Manheim passed away unexpectedly on Tuesday, May 26, 2015 at the Metro Health Medical Center, Cleveland, Ohio. Born in Bird-In-Hand, he was the son of the late Noah W. and Mary R. Hershey Kreider. Noah was the husband of Reba Esbenshade Hoover Buckwalter-Kreider, and they would have celebrated their 3rd wedding anniversary on August 4. In 1954 he married Marian Irene Landis Kreider, who passed away in 2011 after 57 years of marriage.

Noah was a partner in Kreider Farms, a farming operation that started from one farm of 102 acres in 1934, and evolved into the successful family farm enterprise that exists today. He was recognized as a “Master Farmer”. His love of farming and his desire to contribute to the improvement of the community prompted Noah to be involved in many agricultural and civic organizations. Noah loved traveling-especially road trips; enjoyed the beach, tennis, spending time with the Silver Streak Hunting Club and his “Circle” friends. He had the gift of hospitality and loved serving up heaping dishes of Kreider’s ice cream to the steady flow of family and friends who entered the doors of his home.

Countless people near and far have been inspired by Noah’s friendship, character and integrity. He was a kind and gentle man with a humble heart, and demonstrated his passion for growing God’s kingdom by serving on many ministry boards. He and his late wife, Marian, were also instrumental in starting LCBC Church, and frequently hosted LCBC’s Newcomers and Alpha classes.

Family and friends are respectfully invited to attend Noah’s funeral service at LCBC Church, 2392 Mount Joy Road, Manheim on Wednesday, June 3, 2015 at 11:00 AM. A time of food and fellowship will be available for all guests after the service. There will be a public viewing at the church on Tuesday, June 2 from 2:00 PM – 4:00 PM and 6:00 PM – 8:00 PM, and again on Wednesday morning at the church from 9:00 AM – 10:00 AM. Please enter using the Auditorium South entrance of the church. Graveside service will follow at the Kreider Family Cemetery, Indian Village Road, Penn Township at 4:00 PM.