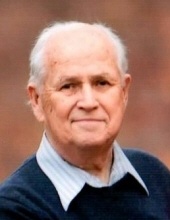 Nelson Joseph Myers, 88, was born at home in Washington Township, Waynesboro, Franklin County, Pennsylvania to Joseph A. and Nellie Strite Myers, who preceded him in death. He passed away on September 20, 2020, surrounded by his wife and daughters.

Nelson was a graduate of Chambersburg High School, class of 1949. He was first employed by the Franklin County Artificial Breeding Cooperative and transferred to the Southeastern Pennsylvania Artificial Breeding Cooperative in 1950. He married Faith Wenger in October of 1952. She joined him as he served a two-year term of alternative service in Montour County, PA as a Dairy Herd Improvement Association milk tester, after which he returned to the Southeastern ABC, where he worked until 1968. After a brief time with Zartman Dodge of Lititz, Nelson entered employment with Herr Foods, Inc. of Nottingham, PA. Over the years, he held a number of positions with the company, but he retired in 1998 as their chief trainer for route salespersons. Faith and Nelson lived in Lititz, PA for over fifty years.

He loved to travel and especially enjoyed family vacations at the beach. In his retirement, he enjoyed volunteering in the church, watching Penn State football, working in his yard, and spending time with his family. He was a sweet, loving, and caring person, dearly loved by everyone.

There will be a private graveside service for the family; a public memorial service will be scheduled at a later date. The family wishes memorial contributions to be made to the Manheim and Speedwell Heights Brethren in Christ Churches, Paxton Street Ministries in Harrisburg, or the American Heart Association.

His aim was to live at peace with all people.
To order memorial trees or send flowers to the family in memory of Nelson J. Myers, please visit our flower store.