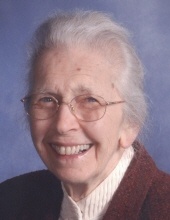 Miriam Elizabeth Blank LeFever of East Petersburg, went home to be with her Lord Wednesday March 15. Miriam’s faith was apparent through her many years volunteering in service for others. She was a member of East Petersburg Mennonite Church where she taught in Sunday School and in summer Bible School and the Sewing Circle where she also served as president.

She was born on February 24, 1921 in Upper Leacock Twp. to Elam Beiler and Mira Kauffman Shenk Blank. She was the first of five children. She graduated from East Lampeter High School in 1939, and enjoyed serving as alumni secretary for eight years in the 1980’s.

Miriam married Lloyd K LeFever March 31, 1945. He preceded her in death February 14, 2009 after nearly 64 years of marriage. They had traveled in all of the lower 48 States, and all of the bordering Canadian Provinces.

After Lloyd finished four years in Civilian Public Service they settled in East Petersburg where she served as a 4H Club leader for several years. Under Lancaster Mennonite Conference she served the Associated Sewing Circles, four years as vice president and four years as President. In 1964 as part of a study/ planning committee in the interest of girls work, Miriam served as the first secretary of JGA’s (Junior Girls Activities).

Miriam served as a summer cook at Camp Hebron, Halifax, and at Camp Black Rock, Quarryville. At Black Rock she became involved in the Women’s Auxiliary serving on numerous committees including Ways and Means. Miriam and her friend Arlene Hess co-edited Black Rock’s “Family Favorites” cook book in 1976.

Miriam was a charter member of the East Petersburg Historical Society and recently served as chairman of the program committee.

Her deepest joy was working with the Mennonite Central Committee, based in Akron. Beginning in the 1960’s, she served one day a week at MRC (material resource center) and since then at Re-Uzit Shops, first in New Holland until 1976, and then in Mount Joy where she served as secretary, supervisor and pricer until 2016.

She will be missed by her son Kenn married to Carolyn Ruth Packer LeFever, of Manheim; grandson Kenneth Lloyd Jr married to Rebecca Norris LeFever; three great grandchildren Kurtis Aleksandr, Daniel Justis, and Elizabeth Izella LeFever, of Lancaster. She is also survived by a brother David E, husband of Joanne Blank, of Landisville; and loving and caring nieces and nephews.

Preceding her in death is a brother Mervin E Blank and two sisters: Gladys Leiby, and Verna Mowrer.

Relatives and friends are respectfully invited to attend Miriam’s funeral service at the East Petersburg Mennonite Church, 6279 Main Street, East Petersburg, on Wednesday, March 22, 2017 at 11:00 AM. There will be a viewing at the church on Tuesday evening from 6:30 PM to 8:00 PM with additional viewing on Wednesday morning from 10:00 AM until the time of the service. Interment will be in the adjoining church cemetery.