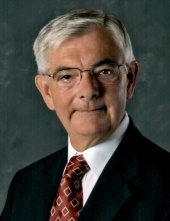 Michael B. Klunk, 68, of Lititz, died peacefully surrounded by his family on Tuesday, February 5, 2019 at the Penn State Hershey Medical Center. Born in York, he was the son of the late Bernard and Pearl Inners Klunk. Mike was the loving husband of Sandra L. Monteil Klunk and they observed their 46th wedding anniversary in August of last year.

Mike earned his undergraduate degree from The Pennsylvania State University, a Master of Science in Counseling from Shippensburg University, and his Ed.D in Adult and Vocational Education from Temple University. For over 34 years Mike was instrumental in the leadership and growth of Harrisburg Area Community College. He retired in 2004 as Executive Dean, CEO of HACC’s Lancaster Campus. He was a member of St. James Catholic Church, Lititz.
Surviving in addition to his wife Sandy, are two daughters: Laurie A. wife of Mark Crawford of Lebanon, Jillian M. wife of Joseph Guzzardo of Philadelphia, and two granddaughters, Abigail and Kate Crawford. Preceding him in death is a sister, Joan Emig.

Relatives and friends are respectfully invited to attend a Mass of Christian Burial at St. James Catholic Church, 505 Woodcrest Avenue, Lititz, on Friday, February, 8, 2019 at 10:30 AM with the Reverend James O’Blaney C.Ss.R as celebrant. There will be a viewing at the church on Friday morning from 9:30 AM until the time of the service. Interment will be private in Mount Rose Cemetery, York. In lieu of flowers, contributions may be sent in Dr. Klunk’s memory to: The Michael B. Klunk Scholarship Fund, c/o HACC Foundation, PO Box 8915, Lancaster, PA 17604-9966.
To order memorial trees or send flowers to the family in memory of Michael B. Klunk, please visit our flower store.