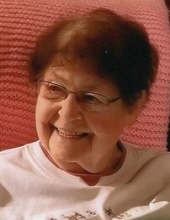 Mary Jane Gates, 91, of Lancaster, died peacefully surrounded by her beloved family on Thursday, February 13, 2020 at Masonic Village at Elizabethtown. Born in Lancaster, she was the daughter of the late Harry J. and Alice Longsdorf Hecker. A 1947 graduate of Lancaster Catholic High School, Mary Jane was also the Drum Major of the marching band. She was the loving wife of William R. “Bill” Gates Jr. and they observed their 66th wedding anniversary in June of last year. Bill and Mary Jane were married at St. Joseph Catholic Church, Lancaster, on June 13, 1953. Mary Jane worked 12 years for Hamilton Watch Company, Lancaster, she then worked in the food service department for the Hempfield School District for 2 years. Mary Jane retired from Nissin Foods (USA) Company, Inc. of Lancaster where she was employed for 10 years. In her early years she was a member of St. Joseph Catholic Church Lancaster; and then was one of the founding members of St. Leo the Great Catholic Church, Lancaster. Mary Jane and other members of the church met in a barn on Marietta Avenue Lancaster until the church was built. She was also a member of the Order of the Eastern Star, Columbia Chapter. Mary Jane and Bill made many trips to Texas and California; she especially enjoyed attending the Rose Bowl Parade and the Rose Bowl game afterwards. They also went on a cruise to Alaska and vacationed in Hawaii. In the fall Mary Jane and her family would travel to the family cabin called “Stoney Brook Lodge” in Potter County. Mary Jane was a caring and loving wife and mother and had a deep passion for animals.

Surviving in addition to her husband Bill, is a daughter, Carol Gates Shirker wife of Newpher “Newt” Shirker Jr. of Lancaster.

The family would like to thank the staff at Masonic Village at Elizabethtown, Benjamin Franklin Third Floor, Masonic Village Hospice, and certified nursing assistant, Catalina “Cat” Keafer for their exceptional care and loving support given to Mary Jane during her three-year residence.

Relatives and friends are respectfully invited to attend Mary Jane’s funeral service at the Buch Funeral Home, 21 Market Square, Manheim, on Saturday, February 22, 2020 at 10:00 AM. The family encourages everyone to dress casual for the service and viewings. There will be a viewing at the funeral home on Friday evening from 6:30 PM to 7:30 PM with additional viewing on Saturday morning from 9:00 AM until the time of the service. Interment will be in Manheim Fairview Cemetery. Many friends and family know that Mary Jane loved animals more than anything else; in lieu of flowers, please consider a donation in Mary Jane’s memory to: Leo’s Helping Paws, 1284 Wheatland Avenue, Lancaster, PA 17603. Leo’s Helping Paws provides financial assistance to dog rescue groups in Pennsylvania and neighboring states with a primary focus on puppy mill dogs; for additional information go to: www.leoshelpingpaws.org; or if you love cats, Centerville Pet Rescue, 237 Centerville Road, Suite 7, Lancaster, PA 17603, for more information you may go to: www.centervillepetrescue.org.
To order memorial trees or send flowers to the family in memory of Mary Jane Gates, please visit our flower store.