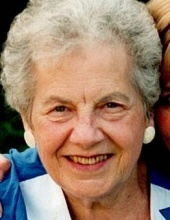 Marion R. Weaver, 100, of Lititz, passed away Sunday, February 6th at Luther Acres. Born in Lititz, she was the daughter of Arthur and Dorothy (Fleischmann) Rosenberg. She was married to the late T. Fred Weaver for 62 years. Twelve days after they were married, Fred deployed overseas and returned after World War II ended.

Marion was a 1939 graduate of Lititz High School. After graduation, she worked as a secretary at the former Animal Trap Co. and also in her father’s business, Rosey’s Ice Cream and Lunch Wagon. She perfected her cooking and baking skills while working with her husband at Weaver’s Restaurant across from the park entrance. They owned and ran the restaurant for 14 years before selling it to Lester Bingeman.

Marion later was an integral part of the first candy kitchen at Wilbur Chocolate. She enjoyed creating many new ideas for hand-dipped chocolates until she retired at the age of 80.

Marion’s creativity knew no boundaries. She was a prolific painter in all mediums. She also did ceramics, sculpture, macramé, batik, jewelry making and sewing. She taught an adult sewing class at Warwick Middle School for two years. Marion belonged to the Village Art Association, the PA Guild of Craftsman, the Order of Eastern Star, Lititz Historical Foundation, and volunteered for Meals on Wheels. Marion and Fred both enjoyed many years of active membership in the Lititz Ambucs.

Although Marion had no children of her own, she was a loving mother and grandmother to her siblings, and many nieces and nephews. Surviving is a brother, Bruce (Anne) Rosenberg of Atlantic City, NJ, a sister Polly (Nick) of Gilroy, CA. Preceding her in death was a brother, Robert C. Rosenberg, and a sister Sylvia Maharg.

The family would like to offer a very special thanks to Luther Acres staff for their many years of loving care given to Marion.

A celebration of life will be held later at the convenience of the family. Interment is in Macpelah Cemetery. Those desiring may send contributions in Marion’s memory to Luther Care at 600 East Main St. Lititz, Pa 17543.
To order memorial trees or send flowers to the family in memory of Marion R. Weaver, please visit our flower store.