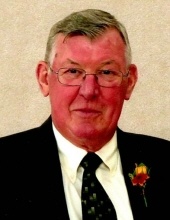 Luke E. Bruckhart, 80, of Manheim passed away peacefully at home on Sunday, March 20, 2022. Born in Lebanon, he was the son of the late John and Anna Wenger Bruckhart. He was the loving husband of Eileen L. Balmer Bruckhart and they would have celebrated their 59th wedding anniversary this September. Luke retired after 37 years with the PA Department of Agriculture. Following retirement, Luke also worked as a driver for Elite Coach and a bus driver for Joseph C. Graybill, Inc and the former Rufus K. Geib Bus Service, Manheim. He was a 1959 graduate of Manheim Central High School and was inducted into the Hall of Fame in 2013. He was a member of East Fairview Church of the Brethren, Manheim. Luke was well-known for his outstanding contributions to the Manheim Community. In 1962, Luke was elected to the Manheim Community Farm Show Board of Directors and held office of President from 1978-1987, Committee Chair for Food Stands and Rides, Manheim Farm Show Delegate to the PSACF State Convention, elected to the State Fair Board of Directors and in 2017, Luke was inducted into the Manheim Farm Show Hall of Fame.

Surviving in addition to his wife are two brothers: J. Clair husband of Hope Bruckhart of Mount Joy, Dale husband of Dottie Bruckhart of Connecticut, several nieces, nephews and great nieces and nephews. Luke was preceded in death by a sister, Doris Cooper.

Relatives and friends are respectfully invited to attend Luke’s Funeral Service at East Fairview Church of the Brethren, 1187 Fairview Road, Manheim on Monday, March 28, 2022 at 11:00 AM. There will be a viewing at the church on Monday morning from 9:30 AM until the time of service. Interment in the adjoining church cemetery.

To order memorial trees or send flowers to the family in memory of Luke E. Bruckhart, please visit our flower store.