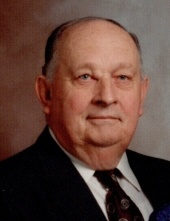 Louis H. Hoober, 97, of Lititz, and formerly of New Holland, died peacefully on Friday, November 29, 2019 at Landis Homes Retirement Community. Born in Earl Township, he was the son of the late Jacob and Lydia Ann Burkholder Hoober. Louis was the loving husband of Miriam Denlinger Hoober who died in April of 2013. For fifteen years Louis owned and operated his own farm in Bart Township. He later became involved in the boating industry founding Skee-Craft Boat Company in Intercourse; and was involved in sales in the boating industry for many years. From 1971 to 1998 he was the owner and operator of Skee-Craft Boat Works specializing in fiberglass fishing and sail boats. Louis was a faithful and active member of St. John’s United Methodist Church, Paradise, where he served on the Trustee Board. Louis was a charter member of the Bart Township Fire Company and served as treasurer. He also served on the Bart Township School Board for six years. Louis was a life-long avid hunter and fisherman, and he enjoyed his retirement years at Sandpiper Cove on Virginia’s Eastern Shore.

Relatives and friends are respectfully invited to attend Louis’s memorial service at the Landis Homes Retirement Community, WEST BETHANY CHAPEL, 1001 East Oregon Road, Lititz, on Monday, December 9, 2019 at 2:00 PM. Friends may visit with the family in the chapel on Monday afternoon from 1:30 PM until the time of the service. Interment will be private in St. John’s United Methodist Cemetery, Paradise.