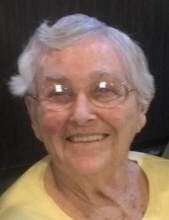 Loretta Mae Kelly, formerly of Mount Joy, was a mother, grandmother, and exemplary campfire builder. She passed away on January 7, 2021 at Luther Acres in Lititz, PA. She was 89. Born in Salunga, Loretta was the daughter of Elizabeth (Young) and Clayton Aument. After graduating from Hempfield High School, she worked at the Hamilton Watch Company, where she met her husband, Rex Kelly. She spent 35 years as a school bus driver. An athlete herself, Loretta most enjoyed transporting Donegal sports teams. She found a partner later in life, Philip “Pud” Abel, with whom she traveled the country, golfed, and camped at their cabin in Perry County. The two could often be found on the Evergreen Golf Course, at Jim Mack’s, or The Caddy Shack for a round of mini golf and ice cream. Loretta found great joy in the kitchen. She was a whoopie pie savant and made a mean chicken pot pie. Her Christmas cookie baking tradition will be carried on by her daughters. Her family will remember Loretta for her chocolate birthday cakes, her giggle, games of Rummy, and her ability to keep up with Norlanco alongside her pal, Betty.

Loretta will be remembered by her three daughters: Deborah Kelly and her fiance Jerry Maurer, Ocean Grove, NJ; Darla Kelly and her partner Joyce Myers, Denver, PA; Crystal Gebhart and her husband David, Mount Joy, PA; and two granddaughters: Kirstin Gebhart and her husband Nick Pitas, Brockport, NY; and Laura Gebhart and her dog Duck, North Providence, RI. She is preceded in death by her siblings Clayton, Charles, Phares, John, Leta (Carter), and James Aument. Her family is grateful to the long list of people who helped care for her in her later years.

Relatives and friends are respectfully invited to attend her graveside service at Salunga Brethren Cemetery, 48 Holland Street, Salunga (Landisville), on Tuesday January 12, 2021 at 12 noon. In lieu of flowers contributions in Loretta’s memory may be sent to Penn State Thon, 227D Hetzel Union Building, University Park PA 16802 or www.thon.org
To order memorial trees or send flowers to the family in memory of Loretta Mae Kelly, please visit our flower store.