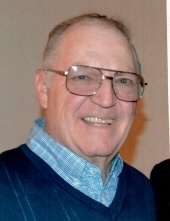 Lloyd R. Byers, 72, of Manheim, died unexpectedly on Wednesday, July 18, 2018 at the Guthrie Robert Packer Hospital in Sayre, PA. Born in Lancaster, he was the son of the late Earl C. and Thelma (Fair) Byers. Lloyd was the loving husband of Sandra E. “Sandy” (Bargo) Byers and they celebrated their 48th wedding anniversary in April of this year.
In 2008, Lloyd retired from the Kellogg Company-Lancaster Plant as a machinist-millwright after working there for over 28 years. Previously, he was employed at Armstrong World Industries-Lancaster Floor Plant for 17 years where completed his apprenticeship. As a veteran, he served in the U.S. Army.

Lloyd was a member of St. Paul’s United Church of Christ, Manheim, where he previously served as a Deacon on Consistory. He was a member of the Red Rose Traveling Bowling League. During his retirement, Lloyd especially loved spending time at the family cabin in Tioga County. Other passionate interests included his love of antique tractors; training and spending time with his horses; and playing golf and hunting with his son.

He was inducted into the Penn Manor High School Athletic Wall of Honor in 2012 for his accomplishments in soccer, wrestling, and baseball. Lloyd had a life-long passion for his family and he cherished the time that he spent attending softball, dancing, and soccer activities for his granddaughters whom he adored!

Surviving in addition to his wife Sandy, is a daughter, Deborah L. “Debbie” wife of Doug Herr of Lititz; a son, Douglas L. “Doug" husband of Tammy (Brenner) Byers of Palmyra; and his four granddaughters: Amanda and Kristen Herr, Madelyn and Abigail Byers. Also surviving is a brother Ralph E., husband of Karen Byers, who reside in Carlisle. Preceding him in death was a younger brother, Wayne Byers.

All are invited to attend a time of visitation with the family to celebrate the life of Lloyd at the Buch Funeral Home, 21 Market Square, Manheim, on Sunday, July 22, 2018 from 4:00 to 6:00 PM. Memorial services and interment at the Manheim Fairview Cemetery will be private and at the convenience of the family. In lieu of flowers, contributions may be sent in Lloyd’s memory to: Graystone Manor Therapeutic Riding Center, P. O. Box 10724, Lancaster, PA 17605-0724.
To order memorial trees or send flowers to the family in memory of Lloyd R. Byers, please visit our flower store.