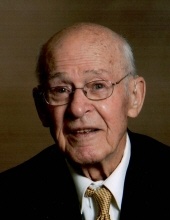 LeRoy U. “Hen” Erwin, 92, of Manheim, died on Sunday, December 22, 2019 at Pleasant View Retirement Community. Born in Hopeland, he was the son of the late Lloyd and Mamie Ulrich Erwin. Hen was the loving husband of Anna Flick Hershey Erwin who died in 2013; his first wife was the late Rita Deotte Erwin who died in 1991. He was a faithful member of St. Richard Catholic Church, Manheim, where he served as an usher. Hen was employed at Raymark Industries for 37 years until his retirement in 1987. LeRoy was also a self-employed house painter in the Manheim area until 2001. A veteran, he proudly served in the United States Navy during WWII. LeRoy was a member of the Manheim Historical Society and volunteered his time to the Manheim Veterans Memorial Ambulance Association. His interests included: hunting, fishing, traveling to the family cabin in Bradford County, flower and vegetable gardening, reading, and rooting for his favorite Philadelphia teams the Phillies and Eagles. Hen was also welcoming in his home; and always had an extra place at the table for any visitor or friend.

Relatives and friends are respectfully invited to attend LeRoy’s Mass of Christian Burial in the Hoffer Auditorium at the Pleasant View Retirement Community, 544 North Penryn Road, Manheim, on Monday, December 30, 2019 at 11:00 AM with Reverend Father Stephen D. Weitzel as Celebrant. There will be a viewing in the Hoffer Auditorium, on Monday morning from 10:00 AM until the time of service. Interment will be in Ruhl’s United Methodist Cemetery.