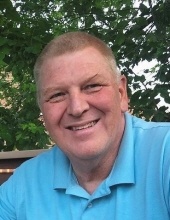 Larry Lee Kramer, 60, of Landisville, went home to be with his Lord and Savior on Friday, March 26, 2021 at his home. He ultimately won the 5-month struggle with cancer, because we know that, "To live is Christ and to die is gain!" And now Larry is in heaven, his eternal home, where "No eye has seen, no ear has heard, no mind has conceived, what God has prepared for those who love him."

Born in Hershey, he was the son of Leah Lehman Kramer of Manheim and the late Floyd Franklin Kramer, Jr. Larry was the loving husband of Julie Miller Kramer. They were married on August 10, 1985. The "Boy from Annville” and the "Girl from Cleona” started dating when he was 17 and she was 15, and have been "Larry and Julie" ever since.

Larry received his B.S. in Physics from Moravian College and completed coursework for his M.S. in Mechanical/Manufacturing Engineering, specializing in Fluid Dynamics, at Lehigh University.
Larry was an SAP Workflow ABAP Developer and IT Supervisor for the Commonwealth of Pennsylvania (2003-present). Prior to this he worked for Armstrong World Industries, Lancaster, PA, as an IT Analyst (2001-2003), Computer Aid, Inc., Lancaster, PA, as a Programmer Analyst (1997-2000), Kao Infosystems Company, Lancaster, PA, as an Information Systems Manager/CD-ROM Premastering Engineer (1993-1996), and IBM Corporation, Charlotte, NC, in various engineering and programming capacities (1984-1993).

Larry was fully devoted to loving and serving the Lord and his family. He always had time for friends and neighbors. He was always faithful, devoted, reliable, hardworking, dedicated, patient, persistent, and loyal to everyone and everything he loved. He was a member of Victory Church, Lancaster. Throughout his life and wherever he lived, Larry attended church faithfully and served the Lord whole heartedly. He served in many capacities including: elder, Sunday school teacher, small group leader, mentor, youth leader, basketball coach, church founding member (Cornerstone Presbyterian, Concord NC), singing in the choir, serving on mission trips, and offering his time and talents however and wherever needed.

Larry was given the ability to fix anything and everything, and he enjoyed doing it. Given the time and the right tools, he never met anything he couldn't fix! He also enjoyed reading and studying God's word. He was passionate about helping others discover their identity in Christ. He loved his family deeply, and looked forward to cheering on his children at their many sporting events at Kraybill Mennonite School, Hempfield High School, Messiah College, and Temple University.

Relatives and friends are respectfully invited to attend his Celebration of Life Service at Victory Church, 1827 Freedom Road, Lancaster PA 17601 on Saturday April 10, 2021. The service will begin at 10:00, followed by light refreshments and fellowship at 11:00. Contributions in Larry’s memory may be made at http://www.OneChild.org or mailed to OneChild, P.O. Box 62600, Colorado Springs, CO 80962.
To order memorial trees or send flowers to the family in memory of Larry L. Kramer, please visit our flower store.