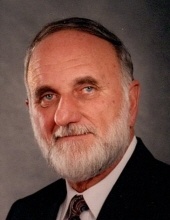 Kenneth W. Sangrey, 88, of Wrightsville, and formerly of Manheim, passed into the arms of Jesus on September 3, 2021 at UPMC Memorial Hospital, York. Born in Manor Township, he was the son of the late Willis Hess Sangrey and Anna Elizabeth Ulmer Sangrey. Ken attended the schools of Penn Manor District, and farmed with his dad in both Manor and West Lampeter Townships.

He married Doris June Good in 1953, and three years later they moved to Manheim, where he was to apprentice under the teaching of Clarence L. Kipp. He became a first-class finish carpenter and job supervisor, who enjoyed carpentry for 40 years. He retired from Clayton E. Gerlach Inc. after 21 years of service to them.

Ken loved to go hunting, both locally and in Montana, to travel, garden, build furniture, and to carve waterfowl. The woodcarving was fine but where to go with all of them, so Ken and his wife started doing decoy and craft shows along the eastern seaboard from Maine to North Carolina. He had to retire from carving in 2012 due to health issues.

Surviving in addition to his wife Doris June, is a son, Keith Edward husband of Frances Sangrey of Lancaster, a daughter, Cherie Lynne White of Rothsville, three grandsons and eight great grandchildren.

Relatives and friends are respectfully invited to attend Ken’s funeral service at the Hempfield United Methodist Church, 3050 Marietta Avenue, Lancaster, on Monday, September 13, 2021 at 11:00 AM. There will be a viewing at the Buch Funeral Home, 21 Market Square, Manheim, on Sunday from 2:00 PM to 4:00 PM with additional viewing time at the church on Monday morning from 10:30 AM until the time of the service. Interment will be private in Mellinger’s Mennonite Cemetery, Lancaster. In lieu of flowers, contributions may be sent in Ken’s memory to: PA Wounded Warriors Inc. 1117 Country Club Road, Camp Hill, PA 179011 or at www.pawoundedwarriors.org.
To order memorial trees or send flowers to the family in memory of Kenneth W. Sangrey, please visit our flower store.