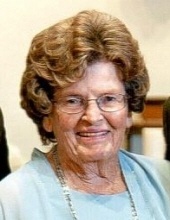 June M. Kopp, 88, of Manheim, passed away peacefully at home on Monday, December 16, 2019. Born in Sporting Hill, she was the daughter of the late Cyrus S. and Stella Nissley Miller. She was the loving wife of the late Harvey S. Kopp who died in 2015. June was an active and faithful member of St. Paul’s United Church of Christ, Manheim where she was involved with women’s fellowship and organized funeral luncheons. In her earlier years, she was a member of the former Jerusalem United Church of Christ, Penryn for over fifty years where she served as a deacon, elder, nursery Sunday school teacher and actively involved in the women’s fellowship. June was also a member of the Penryn Fire Company Women’s Auxiliary. Her interests included playing cards, especially Rummikub, traveling to Green Valley Hunting Camp in Potter County, Twitchell Turn in the Adirondacks and she and Harvey traveled to Alaska six times. June loved to spend time with her friends and family, especially her grandchildren and great grandchildren.

Relatives and friends are respectfully invited to attend her funeral service at St. Paul’s United Church of Christ, 50 North Main Street, Manheim on Monday, December 23, 2019 at 11:00 AM. There will be a viewing at the church on Monday morning from 9:30 AM until the time of service. Interment will be in Penryn Cemetery.