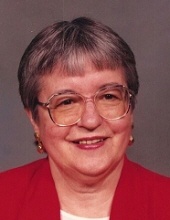 June E. Way, 90, of Salunga, died peacefully, Saturday, February 8, 2020 at her residence. She was the widow of James R. “Jim” Way who died in 2013. Born in Lancaster she was the daughter of the late Anthony and Reba (Hartsaugh) Horn. She was a graduate of McCaskey High School, Lancaster. June had worked as a telephone operator for the former Bell Telephone Co., Lancaster, and as a waitress/hostess at the former Bloomfield Restaurant of Lititz, also the former Keystone Restaurant of Mount Joy, and the Bender Restaurant of Salunga. June was a faithful and active member of Chiques United Methodist Church, Mount Joy, where she was the former president of the United Methodist Women’s. June was an avid bingo player, and especially enjoyed traveling in the R.V. around the country with her family.

Relatives and friends are respectfully invited to attend her funeral service at the Buch Funeral Home, 21 W. Main St. Mount Joy, on Wednesday, February 12, 2020 at 11:00 AM. There will be a public viewing on Wednesday at the funeral home from 10:00 AM until the time of the service. Interment will be in Salunga Brethren Cemetery. In lieu of flowers, contributions in June’s memory may be sent to Chiques United Methodist Church, “Mission Fund”, 1215 East Main St. Mount Joy PA 17552, or to Hospice & Community Care, P.O. Box 4125, Lancaster PA 17604-4125
To order memorial trees or send flowers to the family in memory of June E. Way, please visit our flower store.