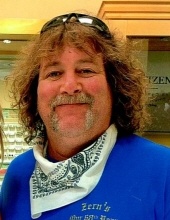 John Garrett Kirtley, 54, of Manheim passed away unexpectedly on Tuesday, February 1, 2022, at Lancaster General Hospital, surrounded by his loving family. Born in Huntington, West Virginia, he was the son of John W. and Ann White Kirtley of Charlotte, North Carolina. He attended Marshall University. Garrett was the loving husband of Wendy L. Kelley Kirtley, and together they would have celebrated their 18th wedding anniversary this September.

Garrett was an operating partner of Zern’s Beverage, Manheim, for the past 15 years. Previously, he worked for R.R. Donnelly and The Breneman Co., both of Lancaster. Garrett was proud to be a part of the Manheim community and was a member of both the Germania Band Club of Manheim, and Elstonville Sportsman’s Association.

He loved spending time with his grandsons, family, and friends. Garrett was known for his wit, his charisma, and his focus on those around him. Though loyal to the Bengals and the Reds, he enjoyed all sports- and had a real passion for golfing.

Surviving in addition to his wife and parents is a daughter, Kelley Lorimer of Mechanicsburg; grandchildren Liam and Grayson; sisters Anne Heather, wife of Jim Langford, and Christine Blair wife of Charlie Allen, both of Charlotte, North Carolina; nieces, Sarah B. and Emma K. Langford, Carley Melhorn; and nephew Tyler Melhorn. He was preceded in death by his son, J. Macon Kirtley.

Relatives and friends are respectfully invited to attend Garrett’s Life Celebration Service at Manheim Brethren In Christ Church, 54 North Penryn Road, Manheim, on Saturday, February 26, 2022, at 11:00 AM. Friends may visit with the family immediately following the service at Elstonville Sportsman’s Association. Interment will be private.

In lieu of flowers, those desiring may send contributions in Garrett’s memory to The GateHouse, 8 North Queen Street, Lancaster, PA 17603.
To order memorial trees or send flowers to the family in memory of John Garrett Kirtley, please visit our flower store.