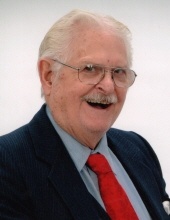 John B. Pyle, 87, of Manheim passed away at home on Tuesday, January 26, 2021 in the company of loving family. Born in Philadelphia, John was the son of the late John L. and Helen Flynn Pyle. John was a devoted husband of over 50 years to the late Joan H. Karpinski Pyle who died in 2008. An intrepid alum of Villanova, University, John relocated to Lancaster in 1958 and began both a family and a lengthy career in electrical engineering; working first at RCA Corp, Lancaster, then AMP, Inc Elizabethtown, and finally retired after a successful tour with the Navy’s Ships Parts Control Center, Mechanicsburg. A member of St. Peter’s Catholic Church, Elizabethtown, John celebrated life in many ways as both a loving father and good friend to many. His was a journey that included annual family trips to the Jersey Shore, an encyclopedic mind for all things, Philadelphia Sports, an enthusiasm for generations of Manheim Central Baron athletes, and a deep-felt care and demonstrated generosity for his family.

Funeral services are private and at the convenience of the family. Interment in Manheim Fairview Cemetery. In lieu of flowers, those desiring may send contributions in John’s memory to St. Peter Catholic Church, 904 Mill Road, Elizabethtown, PA 17022 www.stpeteretown.org.
To order memorial trees or send flowers to the family in memory of John B. Pyle, please visit our flower store.