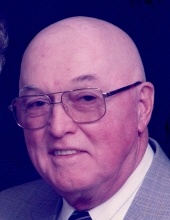 John A. Heisey Sr., 96, of Lancaster, died peacefully at home surrounded by his family on Saturday, February 6, 2021. Born in Columbia, he was the son of the late George and Elsie Krall Heisey. John was the loving husband of Marian Getz Heisey and they observed their 33rd wedding anniversary in July of last year. Throughout his life John worked in the sales department for a number of lumber yards located in Lancaster County. He was a 1941 graduate of Columbia High School and served in the U.S. Army during World War II. He was a former member of Ross Street United Methodist Church, Lancaster. John had a love for photography and you would find him taking photos whenever he had the opportunity. He enjoyed walking each and every day and socializing with his neighbors and making new friends. He was the ultimate “people person”. John was a devoted passionate fan of his Pittsburgh Steelers Football Team. He was a beloved husband, father and grandfather.

Services for John will be private and at the convenience of the family.
To order memorial trees or send flowers to the family in memory of John A. Heisey Sr., please visit our flower store.