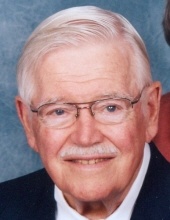 John A. Gibbs, 89, of Lancaster, died peacefully on Friday, July 18, 2014 at the Mennonite Home. Born in Lancaster, he was the son of the late John W. and Maude L. Gibbs. John lived in Lancaster all his life. He was a graduate of McCaskey High School. In 1948, John married Nancy Hoar and they had two daughters: Deborah “Deb” Ann Gibbs wife of Jay Aukamp, and Sharon L. Gibbs wife of Frank O. Burnside, all of Lancaster. Nancy passed away in 1960. John was blessed to find a second great love, Geraldine “Gerry” Longenecker whom he married in 1961. John and Gerry observed their 53rd wedding anniversary this month. Surviving, in addition to his wife Gerry and his children, are three grandchildren: Nicole Coley Creasy, Matthew Coley, and Connor Burnside, and four great grandchildren: Alexis Coley, Amanda Stevenson, Jaidyn Coley, and Parker Coley.

John was an Army Veteran, having served in the Philippines and Japan during World War II. He was employed by Hager Brothers Department Store in the carpet department, and eventually at Watt and Shand as a buyer for the carpet and furniture departments. He finally retired from Bon Ton in 1988.

Relatives and friends are respectfully invited to attend John’s service of Life Celebration and Thanksgiving at the Church of the Apostles United Church of Christ 1850 Marietta Avenue, Lancaster, on Saturday, July 26, 2014 at 11:00 AM. Friends may visit with the family at the church on Saturday morning from 10:00 AM until the time of the service. Interment will be in Neffsville Brethren Cemetery. In lieu of flowers contributions may be sent in John’s memory to: Boys & Girls Club of Lancaster, (Summer Camp Program) P. O. Box 104, Lancaster, PA 17608-0104.

To order memorial trees or send flowers to the family in memory of John A. Gibbs, please visit our flower store.

Church of the Apostles

Service of Remembrance and Life Celebration

Church of the Apostles