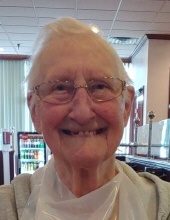 Joan M. Keeney, 87, of Manheim passed away on Friday, March 4, 2022 at Lancaster General Hospital. Born in Manheim, she was the daughter of the late Joseph F. and Edna I. George Smith. She was the loving wife of the late Tyrus M. Keeney who died in 2020. Joan retired from the former Raymark Industries, Manheim. She was a 1952 graduate of Manheim Central High School and a member of the Manheim VFW Post 5956 Ladies Auxiliary. Joan enjoyed playing Bingo.

A Celebration of Life Service for Joan and Tyrus Keeney will be held at Salem United Methodist Church, 140 N. Penn Street, Manheim on Saturday, March 19, 2022 at 12:00 Noon. There will be a time of visitation with the family at the church from 11:00 AM until the time of service. Interment will be private. In lieu of flowers, those desiring may send contributions in Joan’s memory to the American Cancer Society, 314 Good Drive, Lancaster, PA 17603 or Hospice & Community Care, P.O. Box 4125, Lancaster, PA 17604-4125.

To order memorial trees or send flowers to the family in memory of Joan M. Keeney, please visit our flower store.