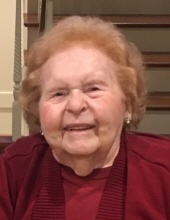 Jeanette D. Hershey Martin, 100, a life-long resident of Manheim, died peacefully on Saturday, June 29, 2019 at the Pleasant View Retirement Community. Born in Penn Township, she was the daughter of the late John S. and Ida E. Pfautz Dourte. Jeanette was the wife of the late Reverend Donald I. Martin who died in November of 2012; her first husband was the late Benjamin H. “Ben” Hershey who died in October of 2000. She was a 1936 graduate of Manheim High School, and in 1938 she was a member of the first graduating class from Linden Hall Junior College, Lititz. In her early years she was employed as a secretary for the Armstrong Cork Company, Lancaster. Jeanette was a former member of the Salem Evangelical United Brethren Church, Manheim, where she was a Sunday school teacher. She served as president of the former Lancaster Osteopathic Hospital Auxiliary; and also volunteered her time serving on the Lancaster County Girl Scout Committee. Jeanette was an active and faithful member of the Manheim Historical Society where she was chairman of the program committee for 15 years. She was the secretary for the Manheim Fairview Cemetery Board for many years. Jeanette’s interests included: knitting, crocheting, gardening and traveling.

Relatives and friends are respectfully invited to attend Jeanette’s funeral service in the Hoffer Auditorium at Pleasant View Retirement Community, 544 North Penryn Road, Manheim, on Saturday, July 6, 2019 at 2:00 PM. There will be a viewing on Saturday afternoon from 1:00 PM until the time of the service. Interment will be private and at the convenience of the family in Manheim Fairview Cemetery. In lieu of flowers, contributions may be sent in Jeanette’s memory to: Pleasant View Retirement Community Benevolent Care Endowment Fund, 544 North Penryn Road, Manheim, PA 17545.
To order memorial trees or send flowers to the family in memory of Jeanette D. Hershey Martin, please visit our flower store.