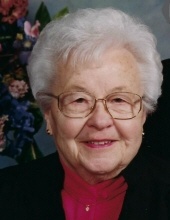 Janet S. Basehoar, 101, formerly of Hershey Dr., Manheim, died on Wednesday, April 22, 2020 at Moravian Manor Communities, Lititz, surrounded by her loving family. Born in Goldsboro, she was the daughter of the late Walter E. and Cora L. Fortenbaugh Shelley. Janet was the loving wife of John D. Basehoar who died in 2001. She was a faithful member of Zion Evangelical Lutheran Church, Manheim. Janet proudly graduated from William Penn High School, Harrisburg (’36) and Thompson Business School, York. A homemaker, she worked as a secretary at the York YMCA and Babcock Hatcheries, Lititz. Janet was a lifetime member of the Susquehanna Yacht Club. She was an avid Philadelphia Phillies and NASCAR fan. Janet enjoyed reading and spending time with friends and family.

Words cannot express the family’s gratitude to the staff of Moravian Manor for the compassion, care and kindness shown to Janet during the last several years. In lieu of flowers, the family would ask that contributions in Janet’s memory be made to Moravian Manor Retirement Community Benevolent Care Fund, 300 West Lemon Street, Lititz, PA 17543.

Due to public health guidelines, services for Janet will be announced at a later date. Interment will be private in Mount Olivet Cemetery, Hanover.
To order memorial trees or send flowers to the family in memory of Janet S. Basehoar, please visit our flower store.