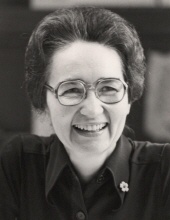 As young adults, Janet and her sister, Elizabeth, served as bookstore managers and sang in a Ladies Quartet with evangelist Myron Augsburger’s Crusade for Christ. Janet taught third grade for two years. For over 37 years Janet worked for Eastern Mennonite Missions, retiring as editor of Missionary Messenger. She was a faithful member of East Petersburg Mennonite Church where she served as librarian, Sunday school teacher, and song leader. Janet’s passion was writing poetry, playing a variety of musical instruments, and listening to music that inspired her. Using Janet’s writing and music abilities, along with Elizabeth’s photography skills, the sisters presented illustrated readings to many groups. A special time in Janet’s life was writing and directing the play, “Henry’s Red Sea”. Janet was a master wordsmith, Scrabble player, and crossword puzzle solver.