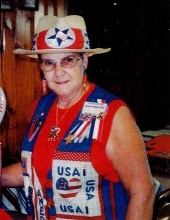 Jane S. Connelly, 84, of Lititz, also known as, THE HAT LADY, was born in Elizabeth Township on November 2, 1936 and moved only one mile away to make her home. She was the wife of the late Richard E. Connelly. Jane was a member of the Brunnerville United Methodist Church. She grew up on a farm and helped her father in the Gun Business, the late W.Z. Bradley and her mother the late Elsie W. Sweigart Bradley. Farming in her early years, and always an outdoor girl, hunting in many states and PA. She also loved to fish in her early years and helped to build her own home where she lived until her passing. Jane worked for Graybill’s Dairy as an office clerk for 25 years, following retirement was president of the Brickerville Leisure Hour’s Citizen Club for 17 years from 1994 to 2012. In 1996 Jane became involved as a coach host with Elite Coach of Ephrata for day and overnight tours. For over 18 years Jane loved putting together tours. She traveled to Alaska on a 30-day tour with 10,227 miles with 37 travelers, also to Manitoba, Canada to the White Polar Bear’s in Churchill, and many local tours. Jane always had a different hat for the tour, she enjoyed music and show’s no matter where they were. She enjoyed riding motorcycle till 1999 with many long trips with her companion, Les Snavely on their Gold Wing touring the U.S. and Canada. Jane always had something for all travelers on the tours, if not a snack, a gift was handed out to all. She was a people person, and on her travels, she always brought home a remembrance; a totem pole from Alaska, a tumble weed from WY. Lots of memories for her living room from her tours. The memories helped fill her life after the death of her dear husband Richard E. Connelly in 1972 following only 17 years of marriage.

Jane was a life member of the National Rifle Association and the American Motorcyclist Association, the Eastern PA Retread Cycle Club for 36 years, and a 33-year member of the Brickerville Leisure Hour’s Citizen Club until it closed in 2011.

Jane’s services will be private and at the convenience of the family. In lieu of flowers, contributions may be sent in Jane’s memory to: Elizabeth Township Community Park, 423 South View Drive, Lititz, PA 17543.
To order memorial trees or send flowers to the family in memory of Jane S. Connelly, please visit our flower store.