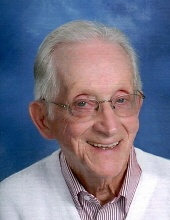 James D. “Jim” Abshire, 94, of Akron, and formerly of Three Rivers, Michigan, went home to be with the Lord on Monday, May 24, 2021 at Hospice and Community Care, Mount Joy. Born in Wabash County, Indiana, he was the son of the late Daniel E. and Blanche H. (Provines) Abshire. Jim was the loving husband of Bonita J. “Bonnie” (Forrest) Abshire and they celebrated their 70th wedding anniversary in March of this year. A veteran, Jim served in the U.S. Navy during World War II. For over 31 years Jim was the sales manager at Skyline Mobile Homes, Ephrata; and was previously the store manager for Falvey’s Men’s Store in Three Rivers, MI. In his early years Jim managed Sands Café in Three Rivers where he met Bonita his “Babe”. Jim also served as a police officer in Three Rivers. It was well known that Jim never had to seek out work. He was always highly sought after by his next employer. He was an active and faithful member of Mount Zion United Methodist Church, Akron, where he served on the cemetery committee. Previously he was a member of the Ephrata Church of the Brethren. Jim was a member and past president of the Akron Lions Club and was the recipient of the Melvin Jones Fellowship Award from Lions Club International. Jim’s interests included: woodworking, walking, hiking, riding his bike or motorcycle, and rooting for the Dallas Cowboys when Tom Landry was coach. Jim passionately devoted himself to being with his wife, children, grandchildren, and great grandchildren. He attended family gatherings, sporting events, concerts and graduations no matter the distance just to be with his beloved family. Jim never met a stranger, and could break the ice with just a smile or a wink. He had a personality that would light up a room and bring sunshine to all who met him. But, he was also a prankster who loved to play fun-loving tricks on anyone he truly loved, whether it was throwing an unexpected glass of cold water or presenting his family with gifts encased in his woodworking creations. He was a gift of pure joy to his family and friends.

Relatives and friends are respectfully invited to attend a service to celebrate Jim’s life at the Buch Funeral Home, 216 South Broad Street, Lititz, on Monday, June 7, 2021 at 10:00 AM. There will be a viewing at the funeral home on Monday morning from 9:00 AM until the time of the service. Interment with military honors will be held at Indiantown Gap National Cemetery. In lieu of flowers, contributions may be sent in Jim’s memory to: Mount Zion United Methodist Church, 105 North 11th Street, Akron, PA 17501 or Akron Lions Club, Attention: Craig Beamesderfer, P. O. Box 64, Akron, PA 17501.
To order memorial trees or send flowers to the family in memory of James D. "Jim" Abshire, please visit our flower store.