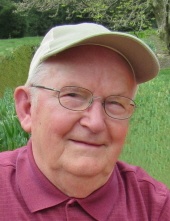 Jacob Linneaus Harnly, resident at Landis Homes Retirement Community in Lititz and formerly of Manheim, died peacefully on Saturday, April 20, 2019 with his family by his side. He was 94 years old. Born in Upper Leacock Township, Lancaster County, he was the son of the late David E. and Lillian E. (Snyder) Harnly.

He and his wife Jeanette enjoyed 63 years of marriage until her death in 2014. He was a faithful and devoted husband, father, grandfather, and great-grandfather.

Jake was known to many in the Manheim community as the calm and considerate service manager at the former Sauder Chevrolet Company, where he was employed for 42 years.

He grew up in Manheim and graduated from Manheim High School in 1942. As a young teenager, he spent his summers working on a farm north of the borough. After graduation, he served as a conscientious objector in Civilian Public Service, first in the Grottoes, VA, as a farm worker, and then at Marlboro, NJ, as a hospital worker until the end of WWII. Upon returning to Manheim he worked for Longenecker Greenhouses.

In his retirement he devoted considerable time to his grandchildren and his love of gardening. One of his greatest pleasures was growing flowers. Roses were among his favorites.

After he and Jeanette moved to Landis Homes, he continued to provide loving care to his wife until her death.

His family and those who knew Jake will remember him as kind, patient, steadfast, and faithful. He was respected for his quiet wisdom. He will be missed.

The family wishes to recognize the skilled and loving care that Jake received at Lancaster General Hospital, both in the Emergency Room and on 6th Floor West.