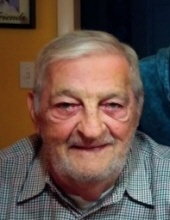 Jack Ross Hughes, 80, of Mount Joy, PA, formerly of Carlisle,PA, and Olathe,KS, died Saturday October 3, 2015, at the Masonic Heath Care Center, Elizabethtown,PA, after a brief illness. He was the widower of Norma J. (Umbower) who died in 1993. Born in Robertsdale, PA, he was the son of the late Lester and Helen (Ross) Hughes. He was a graduate of Tussey Mountain High School and Penn State University. Jack was the Director of Toll Revenue for Sprint Communications in Overland Park, KS. Jack proudly served his country in the U.S. Air Force. He was of the Brethren faith. Jack enjoyed many of life’s pleasures and was especially passionate about cooking – winning awards for BBQ Ribs and Brisket, and his family really loved his peach pie. Another passion of Jack's was the outdoors, he enjoyed hunting, fresh water and salt water fishing, and was a highly motivated wildlife resource conservationist. Another passion was his “Jeepster”, restoring it to its original condition.

Surviving is a son Christopher L., husband of Lucinda Hughes, of Mount Joy; two daughters Amy Hughes-Henton of Olathe, KS and Stacy Hughes of Kansas City, KS,; five grandchildren Zachary and Lila Hughes, Don and Derek Henton, and Scott Loux,II; a brother Jerry husband of Sharon Hughes of Hamburg, PA; and a sister Jeannine Kuffner of Saxton, PA. In addition to his wife and parents, he was preceded in death by a grandson Christopher Hughes, Jr., a sister Carol Baker, and a brother George Hughes.