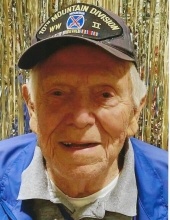 Harris I. Haffner, 96, of Ephrata, formerly of Dresher, PA, died Sunday, May 1, 2022, at Hospice and Community Care, Mount Joy, PA. In 1955 he married Ruth King Allem who preceded him in death on September 1, 2018. Born in Abington, PA, he was the son of the late Paul and Anna (Insinger) Haffner. Harris graduated from Abington High School in June 1943 and immediately enlisted in the U.S. Army. After attending college with the Army’s ASTP, Harris took infantry basic training at Ft. Benning, GA. He served as a cannoneer in the pack artillery of the U.S. Tenth Mountain Division during WW II. He was particularly proud of his service with this unit as they spearheaded the final drive ousting the German Army from Italy. He graduated from Drexel University in 1949 with a degree in mechanical engineering. After a 35-year career as in instrumentation engineer, he retired and moved to Ephrata.

Services and interment for Harris will be private and at the convenience of the family.

To order memorial trees or send flowers to the family in memory of Harris I. Haffner, please visit our flower store.