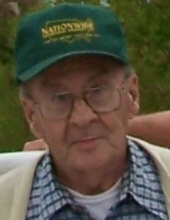 Harold E. Seiders, 97, of Manheim, died peacefully on Wednesday, August 25, 2021 at the Lancaster General Hospital. Born in Middletown, he was the son of the late John Henry and Sadie King Seiders. Harold was the loving husband of Ada N. Cutman Seiders, and they observed their 71st wedding anniversary in June of this year. In his early years Harold worked on area farms; he was later employed for 30 years at the former Baum's Bologna, Elizabethtown. He was an active and faithful member of Conoy Brethren in Christ Church, Elizabethtown. Harold’s interests included: yard sales, Root's Country Market, tinkering with mowers and tractors, collecting clocks of all types, eating Hershey Chocolate Bars, Nonpareils, Anise Bears, watching the movie; ”The Wizard of OZ”, and listening to Gospel Music. His favorite bible scriptures were Psalm 23 and Acts, Chapter 16 verse 31, which states: “Believe in the Lord Jesus Christ and Thou shall be saved”. Harold had a deep love for his wife, children, grandchildren, and extended family; and cherished all the time he was able to spend with them during his lifetime. He loved to spread happiness and laughter to everyone, by telling his “Grandpa Jokes”.

The family would like to thank the staff from Penn Medicine, Lancaster General Hospital, 8 Frederick for the kind and compassionate care given to Harold during his illness and comforting our family during this difficult time.

A Memorial Service for Harold E. Seiders, 97, of Manheim, will take place at the Buch Funeral Home, 21 Market Square, Manheim, on Sunday, October 17, 2021 at 2:00 PM. Friends may visit with the family at the funeral home on Sunday afternoon from 1:00 PM until the time of the service. At the family’s request, everyone is asked to please dress casual for the visitation and service.
To order memorial trees or send flowers to the family in memory of Harold E. Seiders, please visit our flower store.