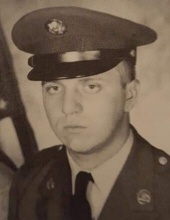 Harold E. Beam, 65, of Harrisburg, formerly of East Petersburg, died peacefully at his residence, Monday November 11, 2019 with his family at his side. He was the husband of Margaret L. (Yingst) Beam, and they celebrated their 31st wedding anniversary this past April. Born in Lancaster, he was the son of the late Frank Jay and Susan (Geroge) Beam. Harold was a plumber/HVAC technician for various companies in the Lancaster area. Harold enjoyed crocheting, woodworking, cars, and spending time with his grandchildren.

Relatives and friends are respectfully invited to attend his funeral service at the Buch Funeral Home, 21 Market Square, Manheim, on Monday November 18, 2019 at 2:00 P.M. There will be a public viewing at the funeral home on Monday from 1:00 P.M. until the time of the service. Interment at Indiantown Gap National Cemetery will be private.
To order memorial trees or send flowers to the family in memory of Harold E. Beam, please visit our flower store.