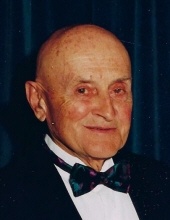 Grant F. Stetzler, 93, died peacefully, Sunday, April 28, 2019 at Masonic Village at Elizabethtown. He was the loving husband of Jane (Yackey) Stetzler and they celebrated 18 years of marriage this past February 14th. He was also the husband of the late Sophie (Johrand) Stetzler. Born in Jefferson Township, Berks County, he was the son of the late Peter A. and Beulah (Stertzel) Stetzler. Grant was a graduate of Muhlenberg High School class of 1943, and Penn State University with a B.S. in Electrical Engineering, and was a member of the Tau Beta Pi, Engineering Honor Society. Grant had worked for IBM in Baltimore, MD, then took a position with Western Electric, Laureldale, PA, where he designed test equipment, and then was employed by Lucent Technologies before retiring in 1985. He was a member of Lodge #62 F& AM of West Reading, Reading Liederkranz, former treasurer of the Berks County Bicycle Club, and was a member of Calvary Lutheran Church, Laureldale, where he served on the council for many years. Grant loved to travel all of the world, whether by ship, river boat, bus, car or bicycle.

Surviving in addition to his wife Jane is a daughter Trudy, wife of William Wilson, Houston TX; step-daughter Carol, wife of Frederick Smith, Carlisle; step-son David B. Jr., husband of Kimberly Berger, Lebanon; daughter in-law Vivian Stetzler, Sinking Spring; a grandson Julian; six step-grandchildren; and a step-great-granddaughter. In addition to his parents and first wife. He was preceded in death by a son Kurt Grant Stetzler, and a brother Peter Stetzler.

Relatives and friends are respectfully invited to attend Grant’s funeral service at the John S. Sell Memorial Chapel at Masonic Village, Elizabethtown, on Monday, May 13, 2019 at 11:00 AM. Interment will be in Laureldale Cemetery. There will be a time of viewing and visitation on Monday at Sell Chapel from 10:00 AM until the time of the service. Contributions in Grant’s memory can be made to Masonic Village at Elizabethtown, Masonic Children’s Home Endowment Fund, C/O Office of Gift Planning, One Masonic Drive, Elizabethtown PA 17022.
To order memorial trees or send flowers to the family in memory of Grant F. Stetzler, please visit our flower store.